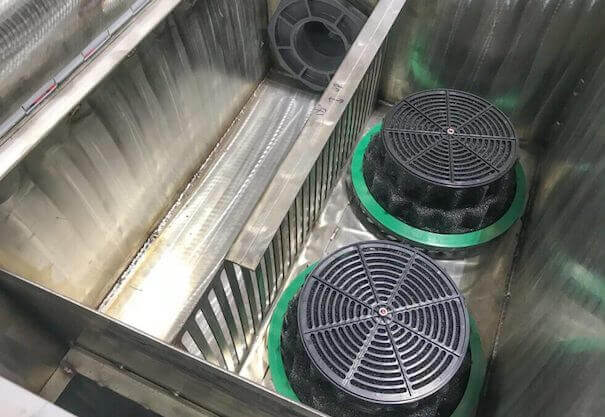 When and how to consider a DownSpout Filter

Downspout filter is essential when considering stormwater runoff from a commercial or industrial building site, water from rooftops can be overlooked or considered a relatively minor impairment to groundwater contamination. However, scientific studies have shown that rooftops in urban and industrial areas can be loaded with contaminants at far higher concentrations than anticipated. As a result, many stormwater managers are being environmentally pro-active and incorporating Fabco’s DownSpout  technology into their designs.

Runoff from roofs, although differing in concentrations from runoff generated from road surfaces or partially sealed surfaces, contains many of the same pollutants including TSS (particulates), nutrients, bacteria, hydrocarbon compounds. Also found are critically heavy metals, in particular: zinc, copper and even lead, which are released as a result of rain water reacting with the materials found in rooftop construction.

Fabco Industries, Inc. has been providing efficient and effective stormwater filter solutions for over 15 years. Our DownSpout systems remove both particulate and soluble pollutants such as heavy metals from rooftop runoff using one or more of our proprietary filter media products contained in sealed replaceable cartridges. The cartridge design has been proven through years of municipal and industrial stormwater use to provide maximum optimization for targeted pollutants while allowing fast exchange and safe disposal. The DownSpout filter can be expanded from the standard two-filter model to facilitate specialized contaminant removal or to accommodate higher flow rates. Above ground and sub-surface DownSpout designs are available.

Talk to us today about the benefits of protecting our water from the top down—with Fabco’s DownSpout.

By increasing impervious surface area, land development has the potential to generate
stormwater runoff that surpasses that of pre-development and disrupts the natural hydrologic
cycle. This is a global issue responsible for impairing water supply watersheds, shellfish areas,
and nutrient-sensitive waters (NCDEQ 2007), both directly and as a result of combined sewer
overflows (CSOs) during heavy rainfall events (Kim et al. 2007).
Stormwater runoff from impervious surfaces has been recognized as a major contributing factor to shellfish growing area closures in North Carolina since studies done in the early 1980s (NCDEQ 2015). Additional
studies evaluated the economic impacts of these closures, as well as the broader impacts of water
quality impairment (Glasoe and Christy 2004). Mason et al. (1999) identified the ‘first flush’ of
rooftop runoff during a rainfall event as containing the large majority of nutrients and other
pollutants, making this the primary target for water quality treatment.
Stormwater control measures (SCMs) such as downspout disconnections (DSDs) redirect
stormwater from storm drains to lawns and other pervious surfaces for treatment. Volume
reduction is an attractive benefit of DSDs for municipalities struggling with stormwater
overflows and flooding. In a pilot field study, the City of Detroit has been a strong advocate for
DSD implementation and estimated that residential downspout disconnections alone, when
applied city-wide, could reduce directly-connected impervious surfaces by 40-44% (Salim et al.
2002).
The City of Portland, Oregon, has also been a leader in residential DSD implementation
through its frequently-cited “Downspout Disconnection Program,” which implemented over
56,000 DSDs between 1993 and 2011 by providing incentives to residents with downspouts
directly-connected to combined sewers; it is estimated that 1.3 billion gallons of stormwater are
now diverted from Portland’s combined sewer system annually (City of Portland n.d.; US EPA
2007).
That being said, downspout disconnections may not be appropriate where topography
causes long-term ponding, especially near the foundation of a house. In such cases, routing of
stormwater to a more appropriate part of the property should be explored, as well as the
implementation of potentially more suitable SCMs (Walsh et al. 2005a).
The total extent and degree to which a watershed is connected to a receiving stream (by
impervious surfaces and conduits) defines the effect that imperviousness has on the watershed
(Shuster et al. 2005). The concentrations of several pollutants appear to correlate more strongly
with the number of connected impervious surfaces within a watershed than with the overall
drainage area, thereby suggesting that even small, directly-connected impervious surfaces can
impact a receiving water body (Hatt et al. 2004).
Directly-connected impervious surfaces bypass
riparian buffers, which eliminates a potential mitigation of runoff on the receiving water body,
even for relatively small storms (Walsh et al. 2005a; Walsh et al. 2005b). Directly-connected
impervious surfaces also decrease runoff lag time, yielding a flashier hydrograph where non-
storm flows are lower and storm events have higher peak flows (Leopold 1968). Urban streams
feature increased nutrient loads, channel morphology alterations, and biotic richness impacts
(Walsh et al. 2005b). Increased runoff volumes from urbanized areas have also been shown to
transport substantial amounts of pollutants, even though nutrient production rates are lower than
in non-urban areas (Bhaduri et al. 2000).
As such, reestablishing pre-development infiltrationand evapotranspiration rates are vital for maintaining the natural baseflow and should also be prioritized in addition to just focusing on runoff volume reduction. Identifying downstream
ecosystem impairments may facilitate the implementation of targeted regional- or watershed-
scale stormwater management efforts, including cumulative improvements (e.g., carbon
sequestration, air quality improvement, and enhanced recreational opportunities) from many
individual SCMs (Roy et al. 2008; Moore and Hunt 2012; Shaneyfelt et al. 2017).
Lawn infiltration primarily provides effective volume reduction during smaller rainfall events.
Additionally, research suggests that stream ecosystems are better adapted to occasional periods
of high flows from large storm events than they are to extremely frequent flows from small
events, especially from directly-connected impervious surfaces (Walsh et al. 2005a). Vegetated
Filter Strips (VFS) have already been established as a low-cost, low-maintenance method for
runoff reduction and water quality treatment (Knight et al. 2013), and a residential DSD is
essentially a lawn VFS receiving redirected rooftop runoff (Carmen et al. 2016). Water
infiltrates through the VFS surface as it flows over the rough, permeable soil while dense
vegetation (turf) slows the flow. Dense vegetation can filter out larger particles; whereas, finer
particles have the chance to be removed via deposition (Dorioz et al. 2006).