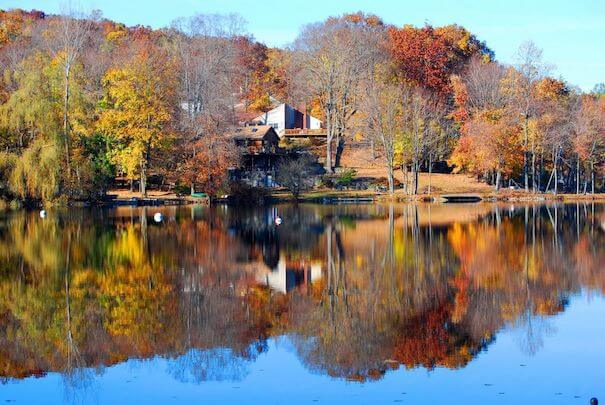 The Challenge: Lake Oscawana in Putnam Valley, NY required the use of catch basin inserts.

The lake was listed as impaired for phosphorus by the New York State Department of Environmental Conservation (NYS DEC) in 2004 and subsequently a Total Maximum Daily Load (TMDL) was issued. The TMDL was a result of the diligent effort of many researchers and scientific professionals who collected and analyzed lake water quality monitoring data going back to circa 1987. The TMDL was finalized and documented in the 2008 Management Plan prepared by Princeton Hydro, LLC. Stormwater from developed land was identified as a major contributor to the external phosphorus load. The remedy was determined to be a the installation of catch basin inserts.

The Solution: The Management Plan identified several strategies, which were then prioritized for implementation based on cost, impact on watershed and operation and maintenance requirements.

One of the strategies selected for implementation was the retrofit of MS4 catch basins with catch basin inserts that discharge stormwater runoff to Lake Oscawana. As a result, the Town of Putnam Valley and Town Engineer (J Robert Folchetti Associates) competitively bid the retrofit of approximately 100 stormdrains in June of 2011 and awarded the bid to Fabco Industries.

The project was completed following a 2-week installation period in mid-October. Specifications targeted two levels of treatment based on location of the drain and physical limitations of the existing infrastructure.

In July 1992, EPA published the final “Water Quality Planning and Management Regulation” (40 CFR Part 130). Together, these documents describe the roles and responsibilities of EPA and the states in meeting the requirements of Section 303(d) of the Federal Clean Water Act (CWA) as amended by the Water Quality Act of 1987, Public Law 100-4. Section 303(d) of the CWA requires each state to identify those waters within its boundaries not meeting water quality standards for any given pollutant applicable to the water’s designated uses.

Further, Section 303(d) requires EPA and states to develop TMDLs for all pollutants violating or causing violation of applicable water quality standards for each impaired waterbody.

A TMDL determines the maximum amount of pollutant that a waterbody is capable of assimilating while continuing to meet the existing water quality standards. Such loads are established for all the point and nonpoint sources of pollution that cause the impairment at levels necessary to meet the applicable standards with consideration given to seasonal variations and margin of safety.

TMDLs provide the framework that allows states to establish and implement pollution control and management plans with the ultimate goal indicated in Section 101(a)(2) of the CWA: “water quality which provides for the protection and propagation of fish, shellfish, and wildlife, and recreation in and on the water, wherever attainable” (USEPA, 1991)

Lake Oscawana (WI/PWL ID 1301-0035) is situated in the Town of Putnam Valley, within Putnam County, New York. Over the past couple of decades, the lake has experienced degraded water quality that has reduced the lake’s recreational and aesthetic value.

Recreational suitability has become less favorable due to “excessive weed growth” in the lake. In 2004, Lake Oscawana was added to the New York State Department of Environmental Conservation (NYS DEC) CWA Section 303(d) list of impaired waterbodies that do not meet water quality standards due to phosphorus impairments (NYS DEC, 2004). Based on this listing, a TMDL for phosphorus is being developed for the lake to address the impairment. A variety of sources of phosphorus are contributing to the poor water quality in Lake Oscawana.

The water quality of the lake is influenced by runoff events from the drainage basin, as well as loading from nearby residential septic tanks. In response to precipitation, nutrients, such as phosphorus – naturally found in New York soils – drain into the lake from the surrounding drainage basin by way of streams, overland flow, and subsurface flow. Nutrients are then deposited and stored in the lake bottom sediments.

Phosphorus is often the limiting nutrient in temperate lakes and ponds and can be thought of as a fertilizer; a primary food for plants, including algae. When lakes receive excess phosphorus, it “fertilizes” the lake by feeding the algae. Too much phosphorus can result in algae blooms, which can damage the ecology/aesthetics of a lake, as well as the economic well-being of the surrounding drainage basin community.