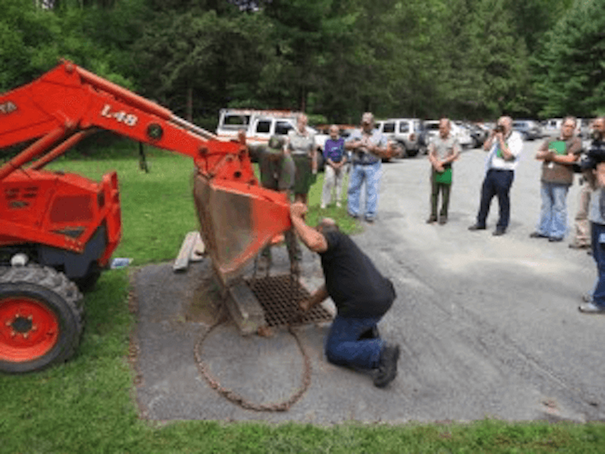 Fabco is proud that the use of its StormSack catch basin filter insert was recently highlighted in the 2013 progress report for the Water Resources Plan for the Delaware River Basin Commission (DRBC).   The DRBC was established in 1961 to manage and protect the water resources of the Delaware River watershed basin and is represented by the states of Pennsylvania, Delaware, New York and New Jersey as well as the Federal Government (DRBC Website).   The DRBC water resources plan is a 30-year goal-based framework adopted in 2004 that will serve as a guide for all governmental and non-governmental stakeholders whose actions affect water resources in the Delaware River Basin.

The Upper Delaware National Recreation Area managed by National Park Service (NPS) was seeking an effective, low maintenance and easily installed filtration system with minimum investment for some of its facilities with stormwater drainage to the River including the NPS headquarters in Beach Lake, PA and the Delaware Aqueduct Roebling Bridge NPS Historic site at Lackawaxen, PA.   After investigating filtration options, the NPS chose Fabco’s StormSack to prevent stormwater pollutants including sediments, gross debris, and hydrocarbons from entering the River at these NPS managed facilities.

The StormSack installation process was demonstrated by Fabco in September 2012 and was observed by a variety of public and private stakeholders, including other NPS site managers, river conservation groups, and local news media.  Subsequently, the Steamtown NPS National Historic Site decided to install the Fabco StormBasin catch basin insert at its maintenance facility at Scranton, PA.

Fabco applauds the NPS and the DRBC for their initiative and demonstration of how better to protect water resources through the targeted use of catch basin filter inserts as an effective best management practice for stormwater.  Fabco looks forward to reporting on additional applications of this stormwater best management practice (2013 Water Resources Plan Progress Report).